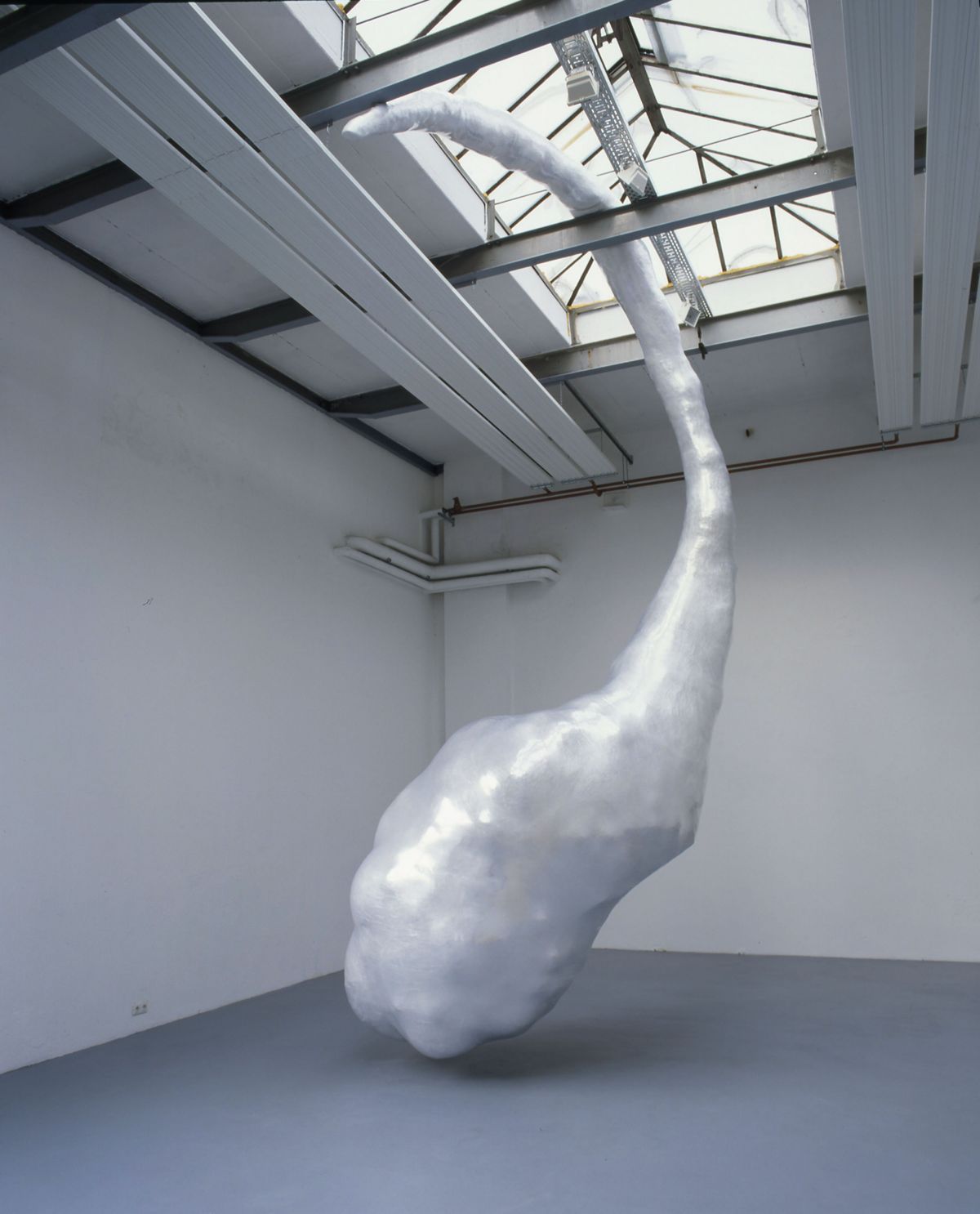 Gereon Krebber is a sculptor. In this case, that means having an exacting way of dealing with the category of sculpture to which all of his works refer: the reflection on particular materials and their transformation. It means balancing volume and mass, as well as having an awareness of the fact that the artistic context falls into the artistic phenomenon itself.

Krebber frequently works with ordinary objects. However, his art does not reflect the cultural coding of products such as colorful balloons, plastic wrap, or oatmeal. Rather, Krebber is interested in the formal logic of his materials, their spatial qualities or surface composition. For instance, in a 2006 work entitled Fetcher, he makes use of the ability of balloons to float in a sculpture that balances on a steel beam on the ceiling of the exhibition space and hangs down to the ground, but does not touch it. The balloons are covered in a thick layer of plastic wrap, which gives the object a bright, shimmering, somehow transparent and yet opaque surface. Although it recalls a formless, organic construct that implies a possible change of shape, Fetcher is actually more of a motion that has come to a halt, a completely elastic sculpture that sluggishly floats in the exhibition space.

Fetcher encourages the viewer’s ability to reflect, for its form and function cannot be clearly defined: it is neither the representation of a familiar object, nor the presentation of the material world and its formal methods of creation; neither surface, nor an entirely sculptural body. This ambiguity forces us to rely upon ourselves. In exploring the object by observing it, we become aware of what is aesthetic about its form. It is not the perfect craftsmanship and the persuasive, sensual design of the object. For what is a vital aspect in judging the quality of a commodity is not enough to elevate an object into the aesthetic realm. Instead, its aesthetics are founded upon a quality in the work that is conveyed via the retina, but goes beyond sheer visual experience: the fact that we can set this form in motion in our thoughts, considering the possible meanings that can be associated with it.
We also realize that this object does not simply continue to be self-referential, but rather, it generates meaning in a constellation with the other physical elements in the space — the architecture as well as the artist’s other works. For example, there is Bemme (2006), a kind of monolith made of Styrofoam with a patina of oatmeal, as well as Schatten (Shadow, 2006), a work hanging on the wall, consisting of notes on yellow paper; and finally, Sumpf (Swamp, 2006), a four-sided hollow in the floor of the exhibition space, into which Krebber poured a bubbly mixture of paste and brilliant cadmium orange. A conglomerate of light, shadows, and color, in which the individual elements in the space affect each other and form a harmonious composition, as if it were a still life constructed just for this situation.

In considering another work, Bemme, the viewer notices its even, rounded form; then suddenly, at the side facing the wall, the work drops off into a vertical, white surface. This is how Bemme allows us to experience the way space both expands and is limited, and at the same time, it is a visual metaphor for Krebber’s artistic strategy. This has to do with circumscribing the self-concept of his works. The works avoid clear definitions and references, making it clear that Krebber’s art has less to do with the transcendental meaning of the objects, and more with encouraging the subject to experience modes of perception, the primary one of which is sensual. Therefore we cling to what we can see, smell, and grasp. In the case of Bemme, this also includes the porous surface and the smell of oats. At first, the latter reminds us of the scent of oatmeal, but over time, as the grain begins to decompose, it transforms into a terrible smell, which hurtles us back into the reality of the exhibition space.